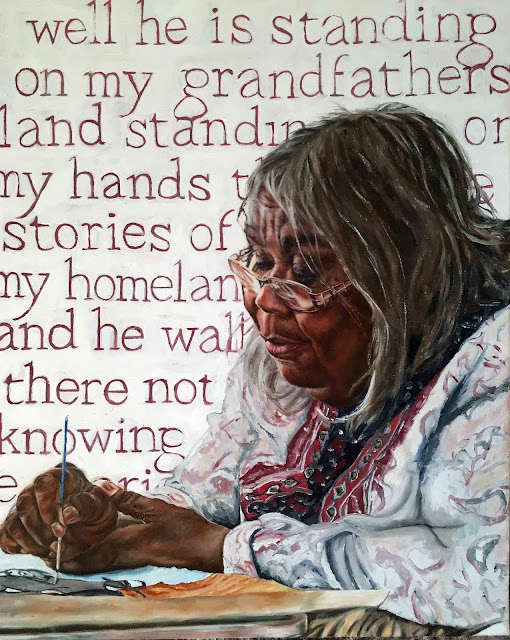 a little bit monkey-mind, moving between tidying up the font and then bringing forward the hands and face.  Going slow and enjoying.  Will work out how much detail and tonal contrast to have on the blouse at the finish I think.

Posted by alstrangeways at 2:40 AM No comments: 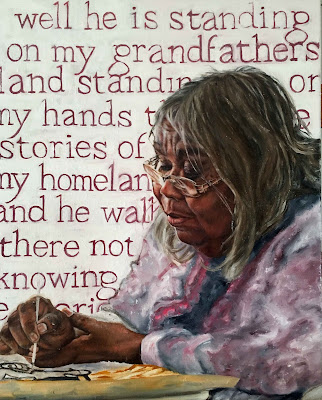 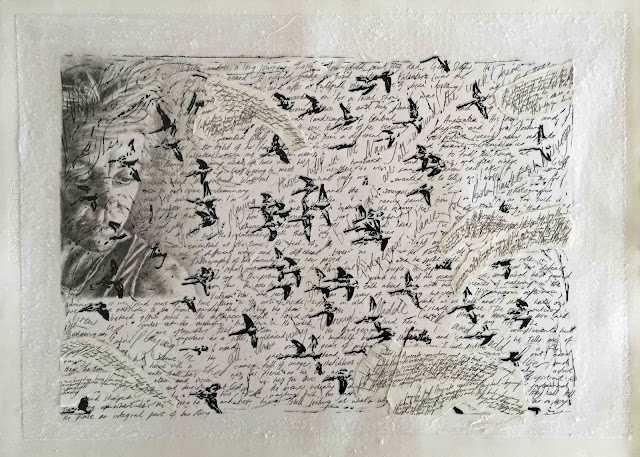 Posted by alstrangeways at 2:54 AM No comments:

'hands': a new approach to one of the KWs 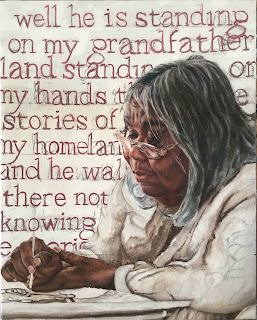 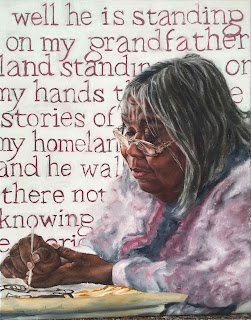 Need to work on the text a bit (quite a bit) more and play with what's coming forward and what's going back, but pretty pleased so far.
Posted by alstrangeways at 2:07 AM No comments: 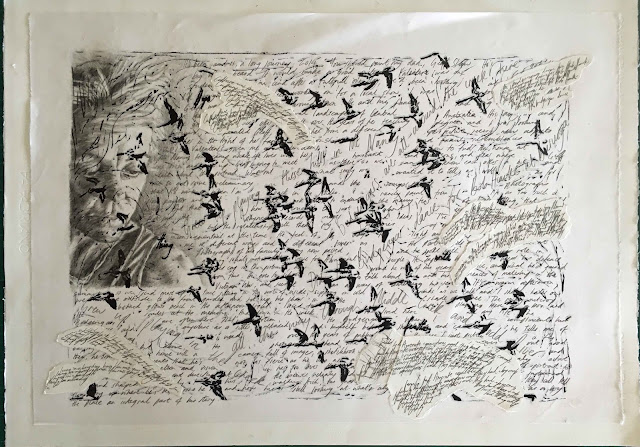 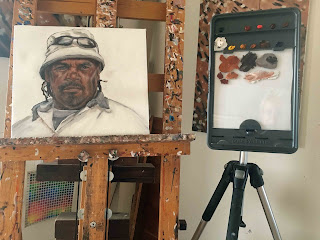 But also got the new palette up and working yesterday . . . will take a bit of getting used to, (vertical and much smaller and a clear division between paint and mixing area) but think it's going to be really good.  Playing with some cut downs and reduxes from People of the School, and monotoning all but the skin tone areas.  Will make bringing those into life and light more fun I think. 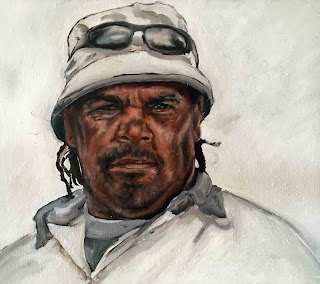 Started on the skin tones with Ronson above, but not yet with Jamie below. 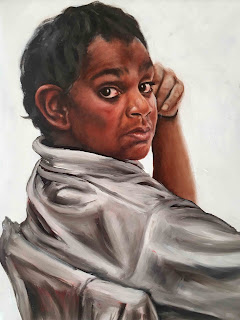 Posted by alstrangeways at 1:58 PM No comments:

Realisations, experimentations and the road

Ok, so worked out (how long did it take?) that the triptych wasn't going to work.  For a bunch of reasons really.  But now,OK I think.  Considering how the three could be three very different approaches to representing KW's painting practice.  Already got a few ideas now I'm not tied to tying the three together . . .

So, also been playing with an idea suggested by a collector, of expressing or documenting in some artwork kind of way the process of making a portrait . . . really enjoyed the different ways it made me think (beyond a simple narrative of the experience, though of course I'll never completely step away from that) . . . portrait on double monoprint . . . (using tracing paper under my hand to keep the paper clean and non-sweaty as I'm drawing on another 40 degree day) 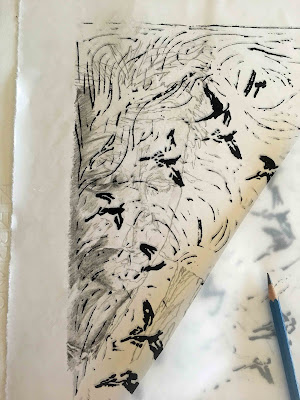 The monoprint's of Budgerigars, which are integral to the sitter's story . . . and the Dickinson quote (hope is the thing with feathers' embedded in the monoprint is part of the story of the painting) 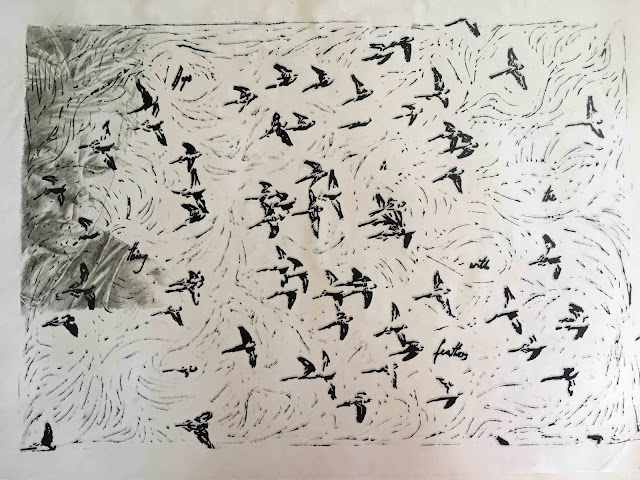 Then narrative text, broken up by the elements of the sitter's story that make the connection to Budgerigars, place and culture 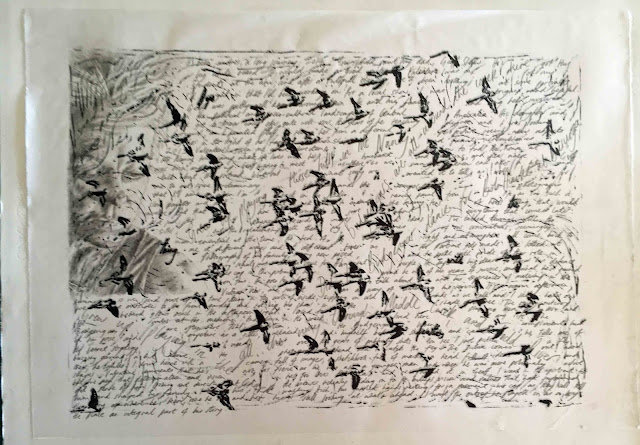 And then overlays from the original sketch books where I was playing with using the sitters stories and handwriting to create the rocky outcrop that forms the backdrop of the portrait and the place that is his country, birthplace and home. 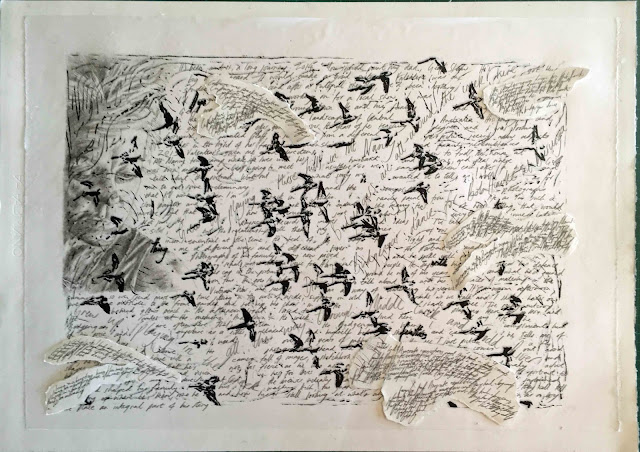 Still got to go back to the graphite portrait now, and bring it forward a bit more by burnishing the darks . . . and considring creating a darker background that will then fade into paleness as it goes from left to right (though that might be a bit ambitious)
Also been playing with some others, including this landscape . . . 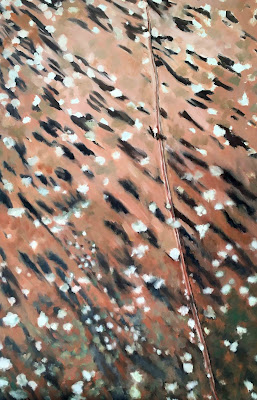 Posted by alstrangeways at 2:33 AM No comments: